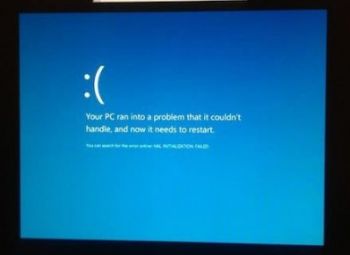 All Windows users are familiar with the dreaded BSOD, or “Blue Screen of Death”. Maybe you were working on an important proposal for work, or were just grinding your Draenei Shaman to 85 by running dailies. Either way, you’ve probably seen the jumble of numbers and crash codes that are part of the Blue Screen of Death.

Windows 8 includes at least one interesting feature, which was displayed during the unveiling of Windows 8 at the recent Build conference. When you see the dreaded Blue Screen of Death, you’ll feel more forgiving, since it sports an enlarged, sideways sad smiley face.

Gone is the mostly uninformative jumble of numbers and text that once was the standard for the BSOD. However, if you are interested in what caused Windows 8 to crash, you can write down the “Search Term” presented on the blue screen.

Maybe I’m the minority, but — How about just designing a version of Windows that doesn’t crash?