What’s the Difference Between a DSP and a Microcontroller? 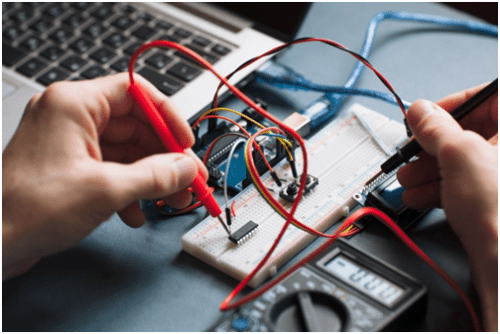 When you are making your first forays into the world of embedded system design, it can be challenging to understand the differences between various forms of hardware and circuitry. One such example is digital signal processors and microcontrollers. Because there are some similarities between the two technologies, and the lines are being blurred all the time, knowing which is which and when to use them can be a challenge.

In the simplest terms, a digital signal processor is a microprocessor designed specifically to process analog signals; in most cases, a DSP will measure, filter, produce, or compress analog signals, turning them into digital signals that represent a specific time, frequency, or sequence.  In other words, it takes analog signals and turns them into digital form. This is the only purpose of a DSP, and all of the circuitry is designed specifically to complete this task. It’s most commonly used in analog devices and applications such as communication devices, radar, and sensor processing, among others.

In comparison, a microcontroller is essentially a small computer housed on a single integrated circuit. It generally includes a processor, memory (both program and a small amount of RAM), and peripherals for input and output. Generally used in embedded applications, microcontrollers are best used in automatically controlled devices, like remote controls, toys, appliances, and medical devices. The fact that the microcontroller is self-contained and doesn’t require a separate microprocessor., memory, and input/output peripherals makes it a more cost-effective way to digitally control devices.

Getting Into the Specifics

The differences between digital signal processors and microcontrollers go much deeper than their overall purposes and applications.

One area where there’s a significant difference is in speed. When it comes to completing complex integer mathematics, DSP’s have a major advantage, since microcontrollers do not contain the hardware necessary to complete the calculations.  This is particularly notable when in the realm of floating point operations. However, while DSPs are designed as a microprocessor to conduct calculations rapidly, and it doesn’t have many other features.

And the features are where the microcontrollers have the advantage. For starters, in order for a DSP to work, it must be programmed with the necessary software before being embedded in the device, and the lack of program memory means that it cannot be changed; a DSP will always do the thing that it was initially programmed to do.

A microcontroller, on the other hands, contains memory that allows it to be programmed and re-programmed, allowing it to interact with the user and the world outside of the device in multiple ways. However, with these features comes some complexity, and a microcontroller generally comes with far more instructions for using the included features, unlike the DSP which isn’t designed to be a robust or full-featured device.

Typically, in the past, when an application did not need a DSP’s functionality, designers would only use the more cost-effective microcontroller. There was a very defined line between DSPs and microcontrollers. Today, though, there is a great deal of overlap between the two systems, and there have been a number of architectures that combine the functions of a microcontroller and a DSP over the last decade. Engineers can now choose from a wide array of complex embedded technology, and with the focus now shifted toward getting embedded devices to market as quickly as possible, most engineers and designers choose a DSP or microcontroller, or a combination processor that will allow them to work quickly.

However, choosing a product that meets all of the requirements isn’t always easy.So many of today’s devices require both analog signal processing (usually from sensors, as in most Internet of Thing devices) and real-time control, but designers are constrained by the need to increase the time to market and reduce costs. Those who typically work with one type of device of the other often find that the other device doesn’t always meet their needs in terms of price and performance, available development tools, and available peripherals. Still, there are some devices, such as the newer microcontroller signal processers, that fit the bill and are growing in popularity.

Developing a device that works correctly and accurately is a complex process. Understanding the nuances of different systems and tools can go a long way toward achieving that goal. While you may hear differing opinion about DSPs and microcontrollers and how they should be used, the most important thing is to understand the differences, and how you can combine their features for the best product possible.