USB Teddy gets his head stuck looking for “cookies” and “chips” 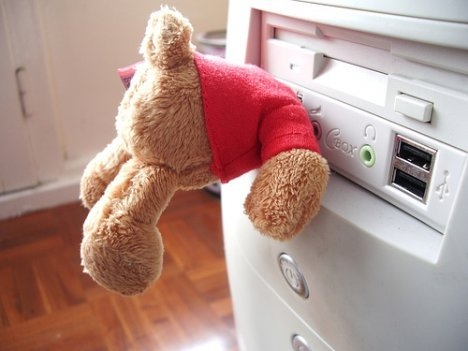 With all the cutesy tootsy USB accessories being released, it’s pretty refreshing to see a USB storage unit with a dark side. This Winnie The Pooh-esque bear looks to have gotten his head stuck in the wrong hole. For those of you who used to read Winnie The Pooh, he gets his fat ass stuck in a tree hole after trying to get some honey.

Designed by Sergio de Ana, the headless bear is made with a functioning 1 GB storage card, enough to give the unfortunate bear his fill of data. Designer de Ana says he got the idea as a spontaneous and weird gift for his fiancee, which eventually evolved into this piece of genius. — Andrew Dobrow