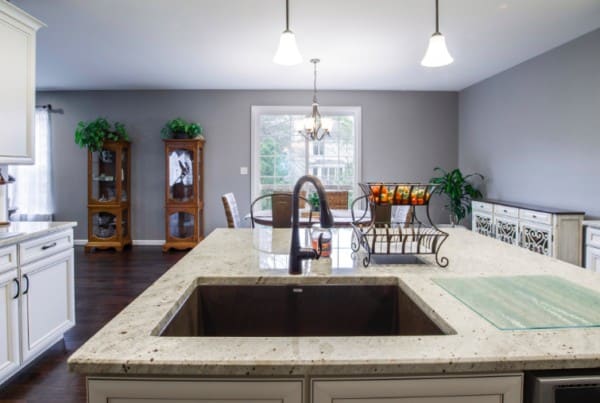 Immediately most people learn of touch sensitive faucets, they think its a brilliant idea. But then they imagine that they might have kids and pets around, and then they don’t seem like such a good idea.

For instance, what if touches from these family members cause the faucet to go off unnecessarily? After all, these faucets require just a light touch to start running.

But, is there a reason to stay off touch sensitive faucets? Most people believe there is. But shouldn’t the guys who design these systems have given thought to such issues, so that you can enjoy the amazing convenience of a touch less faucet regardless of whether you have kids of not?

Luckily, there is quite a bit of information on how touch sensitive faucets actually work, even in seemingly unsuitable situations.

Truth be told, no touch sensitive faucet is similar to another. For instance, top rated kitchen faucets in this category cannot be expected to deliver the same level of convenience as poorer quality alternatives. But how do you know which kitchen faucet is the best?

There is one simple trick that works most time – looking through customer reviews.

On Ebay, there are a number of touch sensitive faucets with lots of reviews and ratings that can give you a pretty good idea about the quality of the faucet on sale.

These concerns aside, some people think that splurging on a touch sensitive faucet is not a good financial decision. Others simply have a love for all things traditional, and a touch sensitive and battery-powered faucet doesn’t make the cut.

But let’s face it, some of the problem issues attributed to these faucets are more myth than fiction. For instance:

1.The electricity powering touch sensitive faucets can be dangerous

Obviously, for a faucet to operate on touch sensitivity, it needs power. People are well aware of the volatile relationship between electricity and water, which makes the idea of an electricity powered faucet scary for some.

However, these devices run on a couple of 1.5 volt batteries, which is not dangerous by any standards. Additionally, the system that powers the faucet never gets into contact with water.

2. The touch sensitive faucet will turn on by itself

No good touch sensitive faucet will have this issue. Initially, these problems were present, but today, the technology has been refined considerably to ensure that the faucet only turns on when necessary.

That is why it is always a good idea to stick with top and proven brands when shopping for touch sensitive faucets to avoid running into these kinds of problems.

However, be careful with the installation of this appliance, since a solid contact with the sink would mean that the faucet will turn on when you touch the sink. But with proper insulation, no such problems will come up.

3. Touch sensitive faucets are not good for kids

Some people fear that touch sensitive faucets will end up wasting a lot of water from being turned on too often by little kids.

On the contrary, a touch sensitive faucet is more appropriate for a home with kids, in part because children have easier access to water with these faucets. In fact, water is less likely to keep running because the faucet is easy to turn off for a kid.

This is not always the case with traditional faucets. However, these faucets are designed to turn off automatically after 3 to 5 minutes.

4. The touch sensitive faucet will turn on and off on its own as you clean it

If you get a good quality touch sensitive faucet, this will not be an issue. These faucet can tell the difference between a “touch” and a “push” or a “grip.”

For these faucets, contact that lasts for more than few seconds counts as a grip, and that does not trigger any response. A touch is a brief contact.

Most pets are not capable of providing the brief touch needed to turn on a touch sensitive faucet, as their touch lasts for too long. In any case, these faucets automatically turn off after a few minutes, even when a pet happens to turn them on.
Conclusion

Most of the fears associated with touch sensitive faucets are unfounded. Actually concerns that these faucets are not ideal should are completely untrue. Children will have an easier time operating these faucets, and they can turn off automatically if left running. The same applies to pets. So, let nothing stop you from getting yourself a touch based faucet, it will be worth your while, regardless of the circumstances.