Google is the best webpage which people use for searching information on internet. Google Doodle is a special symbol , temporary alteration of the logo on Google’s homepage that is intended to celebrate events, holidays, achievements and famous people.Beside Doodles, interactive Doodles supply the customers the various different useful applications. These interactive doodles have become a staple of Google’s home screen. It is a way to highlight achievementssuch as the creation of Pac-Man,to major world events, such as the birthday of famous people or the festivals of the years Olympics.

If you have ever been interested in skill games or fallen in love with adventure games, you might not miss the intersting platform games such as Super Mario Bros, Bloons TD,. Especially, Pac- Man is an icomic video game character from the world renowned and beloved 1980 arcade game of the same name.

Pac-Man is an arcade game developed by Namco. It is publishedfirstlyin Japan in May 1980. Its original name is “Puck- Man”, however, it was turned to the new name “Pac- Man” when it was issued to America for avoiding the vulgar/ dirty word.

Pac-Man is considered one of the classics of the medium, and an icon of 1980s popular culture. Upon its resale, it became a social phenomenon that yielded high sales of merchandise and inspired a legacy in other media. It was popular in the 1980s and 1990s and it still played in the 2010s. 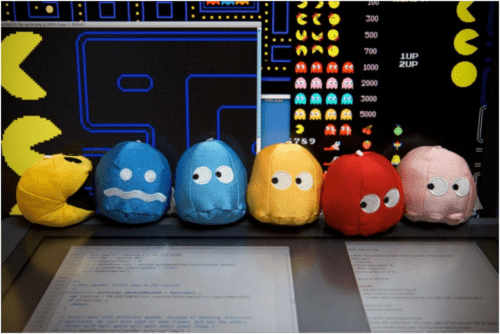 On the occasion of celebration of 30 years of Pac-Man, a Pac-Man game was created on May 21, 2010. This Doodles game is the first-ever interactive Google Doodle game which lead to the others after that. The Pac-man on Google Homepage inherits virtually all of the original graphics and sounds except for the maze of the word “Google”. Even Google’s Pac- Man also supports dual player mode, the game which use for 2 players and can play at the same time.

The Google’s Doodle philosophy are simple, fun, and a bit of history and personality thrown in for good measure. The Google’s logo was changed for “Doodles” before the company established.

Initially, the Doodles were neither alive nor hyperlinked. They were simply images related to the topics. Doodles increased in both frequency and complexity by the beginning of the year 2010s, and in January 2010, the first animated doodle was posted in honor Isaac Newton. The first interactive Doodle appeared shortly thereafter celebrating Pac-Man, and hyperlinks also began to be added to Doodles, usually linking to a search results page for the subjects of the Doodle. In 2014, Google had published over 2000 regional and international Doodles on its homepages, often featuring guest artist, musicians and personalities.

A Crosswords, a game in which you write words that are the answers to questions in a pattern of black and white squares. The players need to answer the quizzes of game in the cross lines or along lines. A crossword is a word puzzle that usually takes the form of a square or a rectangular grid of white- and black-shaded squares. The game’s goal is to fill the white squares with letters, forming words or phrases, by solving clues which lead to the answers. In languages that are written left-to-right, the answer words and phrases are placed in the grid from left to right and from top to bottom. The shaded squares are used to separate the words or phrases. 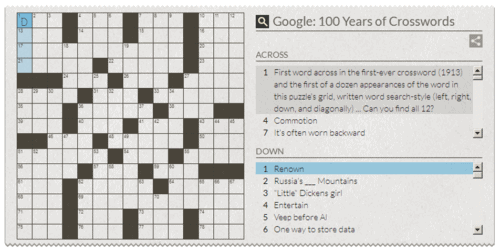 Even though there are lots of new applications for entertainment, people also love the game of crosswords. It is the best way for people to relax in their free time. On the occasion of this game’s 100 years old anniversaries, the game crosswords was created on google doodle game in some countries. This game is belong to skill game and includes 78 quizzes. Based on the most of players’ appreciations, this game is quite difficult and complex.You can refer to it here

Most of people know that Valentine’s Day is a love feast but perhaps few know that this is also the birthday of George Washington Gale Ferris, who is famous for creating the giant Ferris wheel bridge. In 2013, Google’s Doodle design team released an extremely creative Doodle for commemorating the events above at the same time. Therefore, Doodles can display the word “Google” as a central park work-around with two huge spin wheels.

Push a big button to generate a whole series of combinations.

On the Doodle, there is an interactive button and when the user clicks on it, the rotation will begin to operate. After the rotation stops, there are two animals meet each other and for the atmosphere of Valentine’s Day, they will arrange an appointment. The interesting thing is that Google simulates the appointment of these animals with pictures in the form of extremely interesting and fun comics.