Hunt ’em down with Tianyu’s B832 anti-theft multimedia phone 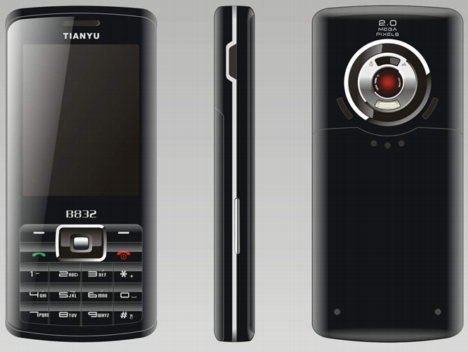 Tianyu B832 is a dualband GSM phone that doesn’t catch attention at first glance: just a plain, fail-safe Siemens-ish design. What’s so special about it would be its anti-theft features. Firstly when somebody steals your phone and changes a new SIM card, an SMS message will be automatically sent to your old number (which you can receive once you get a new SIM card from your operator bearing the same number), so you’ll know who has taken your phone and hunt that cheapskate down.

Secondly, once the phone gets back on network, it can be locked offshore from a computer if you choose to do so, it’s almost like the IMEI trick but this time you are playing police yourself. So the question is, why would anyone want to steal it? Well, the screen is a 2.4″ QVGA TFT, and the camera is of 2 megapixel that can be interpolated to 3 megapixel; the camera can also act as a webcam once connected to the USB port. The body measures 100x51x14mm weighing at 100g, so you can imagine a Nokia N73 screen mounted on to a thinner version of SonyEricsson K750i- quite tempting indeed. The microSD slot can take memory cards up to 1GB, and the music coming out from the stereo speakers sounded loud enough.

Also, a 2.5mm earphone jack is built in. A2DP profile, flight mode and TV-out are all supported. The Tianyu B832 is being released in Hong Kong and Mainland China yesterday, street price is around $225, no word on exports yet. — Sam Chan