This Hat Will Drive You Insane 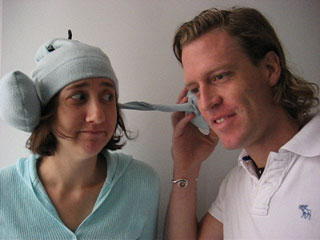 Or at least make other people think you are. The Muttering Hat, created by Kate Hartman, is an interactive art piece designed to get people to think about the indistinct, half-formed thoughts that float through their heads all day. The hat is composed of mp3 players, headphones, speakers, plastic funnels, and microphones, all enclosed in felt. The hat’s two earpieces can be detached, allowing the wearer to hear the outside world more clearly, or to let someone else listen to the wearer’s ‘mutterings’. The mp3 players are initially filled with pre-recorded sounds, but wearers can add their own mutterings to the hat. The muttering hat also allows the wearer to speak their own mutterings aloud, whether recording them or not, while making it more difficult for others to hear. The muttering hat will be shown at the ITP Winter Show at NYU December 17-18. — Mike Payne