Things You Need to Know before Playing Indian Rummy 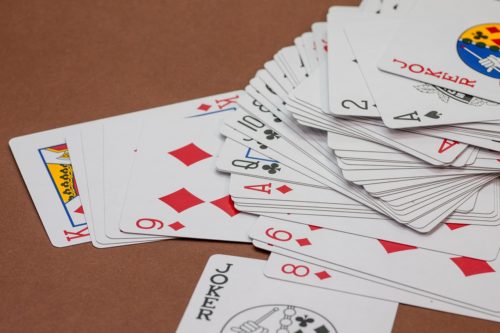 Most serious or even casual gamers know how to play rummy, the classic matching card game popular among many. But do you know how to play Indian rummy? It is a unique variation of the original rummy that is commonly played in India. The differences between the two games are not big. Indian rummy also has features of gin rummy and rummy 500. It is very likely that Indian rummy is a regional variation of South Asian rummy called Rhuk, or Celebes rummy. Yes, there are loads of variations of the game. If you are interested, here are several facts, rules, and other things you need to know about Indian rummy before playing:

Indian Rummy is Played with 13 Cards

Indian rummy is played with each player getting 13 cards. Each game has two decks of cards in total. The ultimate goal of the game is to arrange the 13 cards in each hand in a particular sequence and a set.

Up to 6 Players Can Enter

An Indian rummy game can have between 2 to 6 players. Once the game commences, each player takes a turn to be the dealer.

To win the game, a player needs to create two sequences and sets. Each contains 4 cards. One of the winning sequences must be “pure,” which means the sequence contains no joker cards. When the game starts, a random card is drawn from the deck and is declared the joker. It can substitute for any card in the game. However, only a sequence without the joker card can win the game.

The wild card is another name for a joker card. As mentioned before, the joker card can substitute for any card in the game. However, according to Indian rummy rules, it carries no points. To use a wild card, a player must have a natural rummy, also known as a pure sequence.

The Rules are Simple to Learn

Making sequences and sets can be difficult sometimes (but still fun). But overall the rules of the game are easy enough to understand. In the game, Life refers to creating a natural sequence. Your Life will decide whether you get to use a wild card or whether all your cards are necessary even. Here are several terms used in the game that’s easy enough to remember:

Points Depend on the Card

The Difference between Sequences and Sets

In Indian rummy, sequences and sets are two different things. Sequences are essentially running cards of the same suit, such as diamonds 4, 5, and 6, or heart king, queen, and jack. A set comprises cards of different suits that have the same value. For example, a 4 heart, 4 diamond, and a 4 spade comprises a set. Only sets with different suits are valid. If a set has the two of the same value card of a suit, like two of 4 hearts, then that set is deemed invalid.

To win the game, it’s necessary to make a pure sequence. This is a sequence without a joker card. If a sequence contains a joker card, it’s called impure. It’s still valid in the game, but is not considered a winning hand. Sets, on the other hand, can contain joker cards and be valid. However, the joker card in the set cannot be from the same suit as another card.

As you can see, the rules for the game are simple enough to grasp. You can learn in practically a day and begin to play. Indian rummy is very popular online and you can find sites to play with computers, friends, or strangers from around the world.