The first in a series of posts about the images that have changed the way we understand and make use of the natural world. 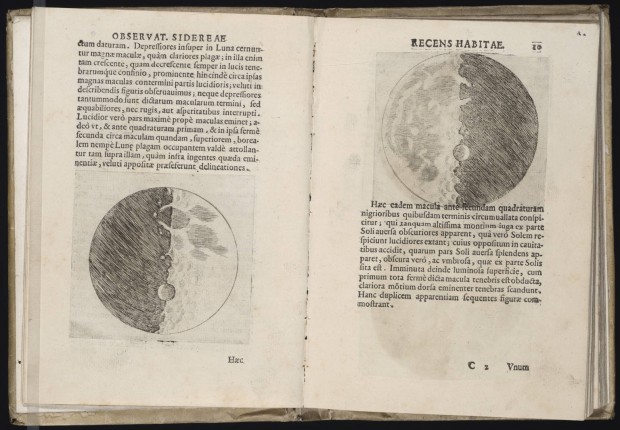 I have noticed that the small spots just mentioned have this common characteristic always and in every case, that they have the dark part towards the Sun’s position, and on the side away from the Sun they have brighter boundaries, as if they were crowned with shining summits. Now we have an appearance quite similar on the Earth about sunrise, when we behold the valleys, not yet flooded with light, but the mountains surrounding them on the side opposite to the Sun already ablaze with the splendour of his beams; and just as the shadows in the hollows of the Earth diminish in size as the Sun rises higher, so also these spots on the Moon lose their blackness as the illuminated part grows larger and larger. –Galileo, Sidereus Nuncius, 1610

When Galileo Galilei first trained his telescope on the moon, many facts about it were already known: the ancients had accepted that it was a celestial body, even a spherical rock, and many agreed that its light came from the sun (although others held that it shone with an inner light or transmitted the rays of Venus); it was known to influence the tides; by the second century AD, Ptolemy had computed its size and distance from Earth with remarkable accuracy. As a celestial body, it was reckoned a perfect sphere, although its mottled surface was somewhat tarnished. When Galileo trained his telescope on the moon, what he saw astonished him: promontories, mountains and valleys, landscape. He described his observations in exhaustive detail in Sidereus Nuncius or The Starry Messenger in 1610. But he also included five woodcut images of the lunar surface. Dedicated to Cosimo II de’ Medici, it was a book filled with marvels: heretofore unknown stars occupied Orion and the Pleiades; the Milky Way was composed of stars; Jupiter had four moons of its own, previously unglimpsed. Quickly pirated by printers throughout Europe, the Starry Messenger‘s pictures of the moon appeared in many places; along the way they were simplified and even turned upside-down by printers who owned a press but lacked a telescope. But the accuracy of the images didn’t matter. These pictures did the work that Galileo’s words alone could not accomplish: they changed the moon into a world, and inaugurated an age in which images were not ideals, but measurements appealing to the authority not of the ancients or the timeless forms, but nature herself.

This image is from a copy of the first edition held in Yale’s Beinecke Library.