The woman in the moon 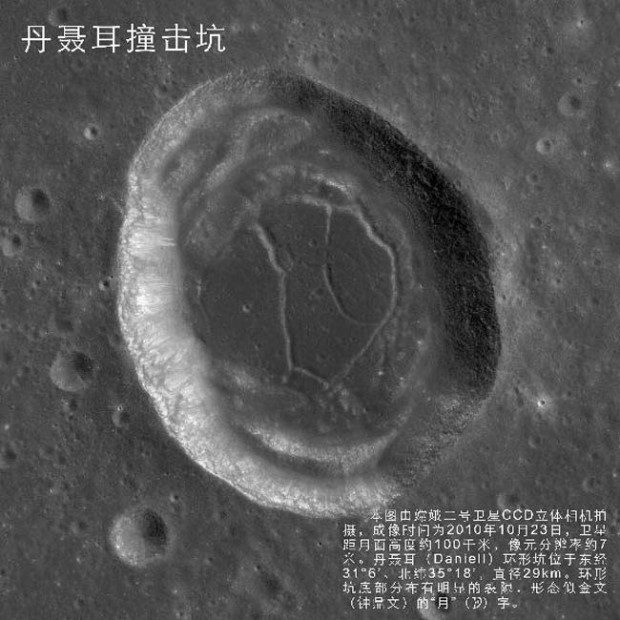 It’s a lunar crater—in this case, a rather striking one found in the Bay of Rainbows in the moon’s northern hemisphere. But as the blazon of Chinese characters indicates, there’s something different about this image. It was made by the probe Chang’e 2—named for the Chinese goddess who lives on the moon with her companion, the herbalist Jade Rabbit—which currently is scouting sites for a planned Chinese robotic moon landing in 2013.

(Conspiracy theorists take note: this stuff is almost too easy to fake today; Google Earth has a lunar layer, too.)

It’s clear that the cost of going to the moon is dropping: Chang’e 2’s budget is estimated at $134 million, which in 1961—the year of Kennedy’s moon speech—would have been about $18 million. Apollo’s initial appropriation, by comparison, was $7 billion; the US program spent more than $25 billion before it ended in 1972. I wonder what this means for the changing geopolitics of space travel. Will every emerging nation at some point plan a landing on the moon? When will India make its first sortie? Brazil? When will the first failed state make the giant leap? Or is there a “lunar divide” that the poorest nations will never cross?