The Theory of a Leaky World is Playable 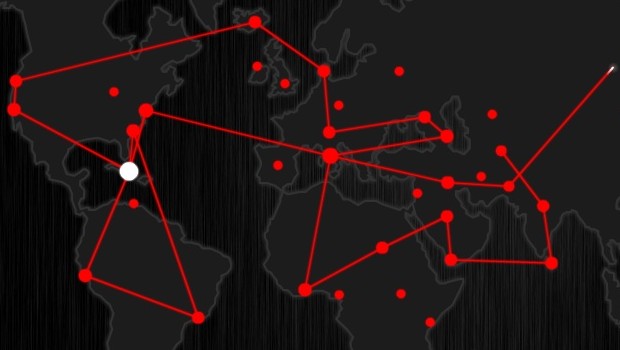 The Wikileaks-themed game called “Leaky World” is called a “playable theory” by its developers, the Italian political games collective Molleindustria (perhaps best known for Every Day the Same Dream, a remarkable exploration of the Sisyphean agon of daily life). The game takes one of the central images of Julian Assange’s 2006 essay “Conspiracy as Governance,” which elucidates the networking-based approach Wikileaks takes towards information and power. Describing the mathematical concept of the “connected graph,” Assange employs the simple metaphor of a pegboard and twine to illustrate the sharing of secrets across networks of power:

First take some nails (“conspirators”) and hammer them into a board at random. Then take twine (“communication”) and loop it from nail to nail without breaking. Call the twine connecting two nails a link. Unbroken twine means it is possible to travel from any nail to any other nail via twine and intermediary nails. Mathematicians say that this type of graph is connected. Information flows from conspirator to conspirator. Not every conspirator trusts or knows every other conspirator even though all are connected. …. If all conspirators are assassinated or all the links between them are destroyed, then a conspiracy no longer exists. This is usually requires more resources than we can deploy, so we ask our first question: What is the minimum number of links that must be cut to separate the conspiracy into two groups of equal number? (divide and conquer). The answer depends on the structure of the conspiracy.

Leaky World’s gameplay rather rigorously instantiates this metaphor. Interestingly, Molleindustria approaches Assange’s image and the theory behind it critically; gameplay incorporates the inescapable conclusion that Assange offers not only a way to break the rule of secrecy, but to make is less vulnerable to breakage as well. The game illustrates a conclusion one can’t help drawing from a reading of Assange’s lucid essay—that his theory of power is both informed and constrained by his experience of computing.

Other criticisms of the theory are enumerated in a textual appendix to the game, which includes the full text of Assange’s essay—a noteworthy approach to the thicket of question, action, and opinion surrounding l’affaire Assange.

Leaky World is the first completed game in Wikileaks Stories, a project of the gaming blog Gnome’s Lair, and one more example of the kind of inspired cultural hack of the Wikileaks drama we find compelling.