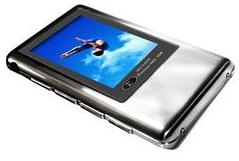 If you saw the new Sumvision Platinum Pro mp3 player on the street, you’d probably think it was the successor of the Moto Razr. This sleek new silver mp3 player coming out of Sumvision is the next cool mp3 player that is selling for a great price. At only $70, this great little device is loaded with features, bringing together some of the better features of its competitors into a beautiful case. Â  Here are the only two (minor) flaws in this player before the features overwhelm you: it only has a 1.8 inch screen, which can a be a little small to watch movies on, and its only a 2GB flash drive, which can be a problem for those of you who have 50GB of music/videos on you computer. But don’t worry, these flaws pale in comparison to everything else this player does. This player can play music, view pictures, watch movies, or listen to e-books, and can work with many file extensions as well. Record yourself singing or whatever you want in either WAV or ACT format with the Platinum Pro, or let the pros do the singing and listen to the included FM radio with the ability to pre-set 20 channels. The Sumvision Platinum Pro mp3 player is a steal at $70 for all the features that come standard on this, unlike other mp3 players (FM radio on an iPod? Ha). — Nick Rice