The Florida Everglades are Garbage… No, Seriously. 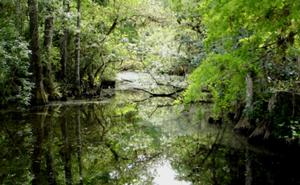 The Florida Everglades have hundreds of small islands that are covered with trees that serve as a home for hundreds, if not thousands, of birds and other animals that call south Florida home. For a while these islands, which aren’t that large at all, were formed from the natural geological features of the area. Now, after doing some research, Robert Carr, Gail Chmura and Maria-Theresia Graf believe that the islands had something of a more “organic” birth.

It started when Carr, studying several tree islands that were being razed, discovered a reddish-grey sediment in the remains of the island. After Carr’s discovery, Chmura and Graf explored further, excavating several of the small islands and finding more of Carr’s hard, reddish-grey substance. As it turns out, this was calcrete and mixed in with said calcrete was charcoal, bones and “human artifacts.”

I don’t even want to know what that means.

So what does this mean? In short: the Florida Everglades may have been formed from ancient man’s stool… and other stuff, too. I guess. When the water levels began to rise in the Everglades, that water would wash loose soil, plant seeds, etc. to these mounds. Over time, the seeds would take and trees would grow. Once the trees grew, they took the nutrients needed from the water and the excess was secreted into the soil, where the calcrete was formed which protects trees from fires and other natural disasters.

Life. She finds a way, doesn’t she?