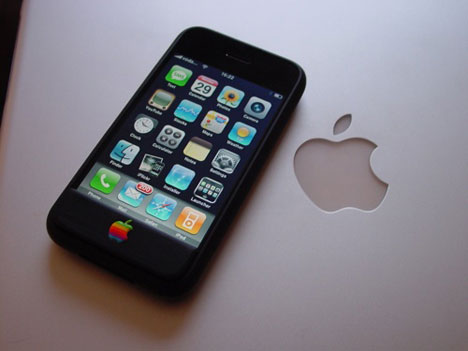 Some of us who grew up during the golden ages of Silicon Valley have built up a sort of nostalgia based around the old rainbow Apple logo. While this version of the log was featured on the Newton, we haven’t seen it on any Apple products since the logo was officially changed in 1998. Strangely enough, that’s when Steve Jobs started moving Apple in their current future-driven direction.

This clever iPhone mod was done by painting the device black and replacing the menu button with the classic rainbow Apple logo. We sort of like the classic look, though it’s not what Jobs had planned for the phone. Don’t misunderstand, we much rather prefer the iPhone to the massive Newton. And by the way, it’s time to check your email after the queue reaches into triple digits. — Andrew Dobrow