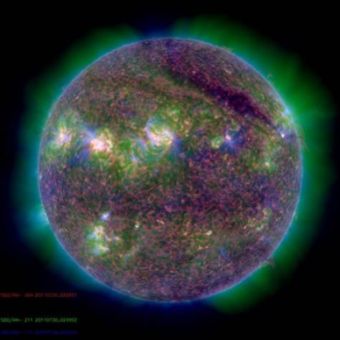 This past weekend, our sun released one of the most powerful types of solar storms on the classification scale — a M9-class solar flare. Thankfully, the “active region” where the flare erupted was pointed away from Earth, and the flare was brief enough that we won’t see any catastrophic effects. So, put away the bug-out-bag and emergency supplies.

Why is an M9 solar flare so strong? Well, scientists classify solar flares according to their X-ray brightness. “C” type flares are the weakest, “M” type flares are mid-range, and “X” flares pretty much cause radiation storms, widespread blackouts and other apocalyptic stuff down here on Earth. This was an M9 class flare, which means it was just below being rated as an X class flare.

Don’t breathe a sigh of relief just yet. The “active region” where this flare erupted will soon be facing Earth.