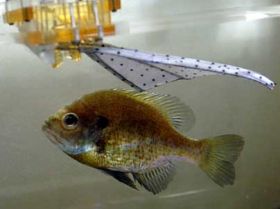 Researchers at MIT Tech have developed a new method of movement for submarines. This new movement is inspired by the fin movement of the bluegill sunfish and would make submarines have no need for propellers.

Scientists hope that this propellerless submarine might one day be able to handle tasks such as ocean surveying and mine sweeping with more agility and speed than autonomous motor propelled subs. A finished prototype is expected within the next two years. — Andrew Dobrow