Sperm Whales May Communicate With Names 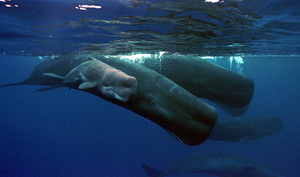 Humans have a way of thinking themselves to be superior to all other forms of life on the planet Earth, and in many respects… yeah, we are. One of the things we point to is our ability to differentiate each other by name. Sure, it’s pretty far down on the list behind harnessing fire, “E=mc2” and the lava lamp, but it’s still up there. But it seems that we may not be the only animal on this planet to use names.

According to a group of biologists, Caribbean sperm whales may very well refer to each other by name, or as close to a name as you can tell with whale songs. It seems that variations in clicks in the 5R coda in the sounds whales make may determine the “name” of a particular whale. So, instead of “hey, let’s go that way” the whales may very well be saying “hey Gary, take a look at the fin on HER!”

…okay, probably not that, but still!

According to Luke Rendell of the University of St. Andrews, the whale sounds could be composed similar to old-style telegrams:

In terms of information transfer, the timing of the clicks is much less susceptible [to interference]. There is no doubt in my mind that the animals can tell the difference between the timing of individuals. It may function to let the animals know which individual is vocalizing.

Of course, all the researchers are quick to acknowledge that this could be a freak occurrence with no significant meaning. Seeing as how the test sample was a paltry three whales, it could be easy to misinterpret the data. Who knows. It doesn’t change the fact that, if true, this would open the floodgates on scientific discussion on how animals communicate with each other.