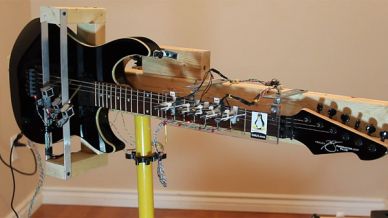 The technique is perfect, the timing is flawless. End of Life is a band that truly knows how to play their instruments. Oh, right. Also, all of their members are robots.

End of Life also goes by the name “EOL Robot Band”. They’ve released several videos on YouTube, showing them performing various songs, including Marilyn Manson’s “Beautiful People”. While the timing is perfect, it does lack a certain… something.

Oh, right. Last time I saw this song, Marilyn Manson was humping the microphone and spraying mysterious liquids on the screaming crowd. But anyway.

I think it’s safe to say that robot bands won’t be taking over pop culture anytime soon. Well, at least not yet.