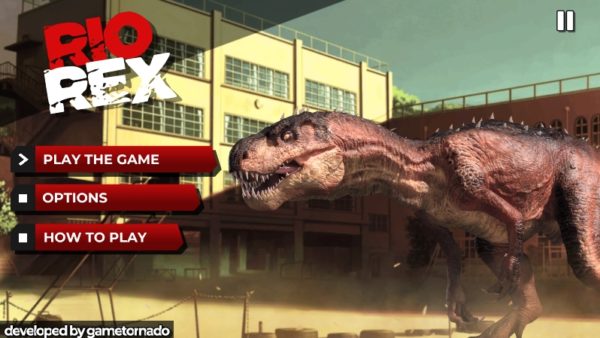 Have you ever wanted to be a dinosaur? If you answered anything other than “of course” to that question, then you are lying and we can prove it. Dinosaurs are, for want of a better word, rad. Huge lizards that roamed untamed savannahs, locked in epic combat for dominance with one another as winged pterodactyls soared overhead…it’s a romantic image, if perhaps one beset with historical inaccuracies.

What would happen, though, if dinosaurs from millions of years ago found their way into the modern world? It’s a question many books, movies, games and other media have sought to answer. From Jurassic Park to Turok and even Godzilla, variations on the “huge monster invades modern human city and starts ruining things” are commonplace. Thankfully, it seems the definitive answer to that question has finally arrived thanks to stomping side scroller Rio Rex. 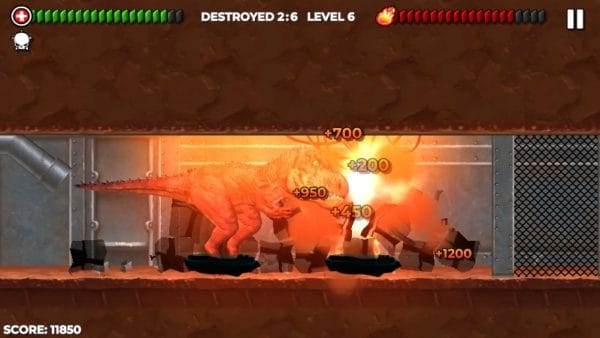 Rio Rex is the latest effort from developer GameTornado. It’s the latest in a long line of Rex titles, which have taken the plucky titular dinosaur to such far-flung locales as Los Angeles, London and Paris. In Rio Rex, though, Rex sets his, her or its sights squarely on the Brazilian city of Rio de Janeiro. And why not? Plenty of beautiful architecture and friendly people to despoil and consume, beautiful sunset vistas against which to roar menacingly…come for the sunshine, stay for the carnage.

“Carnage” really is the watchword with Rio Rex. The game is absolutely suffused with it, as befits its reptilian protagonist. This fun game begins with the titular dinosaur escaping its restraints by biting savagely through them, before tearing the crane operator who was transporting it apart limb from limb. A spray of blood heralds the beginning of the dinosaur’s rampage of destruction, as do some floating numbers indicating score.

Perhaps we’d better back up a little. Rio Rex is a 2D side-scrolling run-and-gun style game reminiscent of Gunstar Heroes, or perhaps Aleksey Abramenko’s Intrusion 2. You control Rex as it strides, chomps and burns (more on which later) its way through 16 colourful, varied levels in search of…err…something, presumably. Rio Rex rather revels in carnage for its own sake, which is not a criticism at all; some of our favourite games are violent for the sake of violence, because violence is cathartic when it’s being done by a digital T. rex. 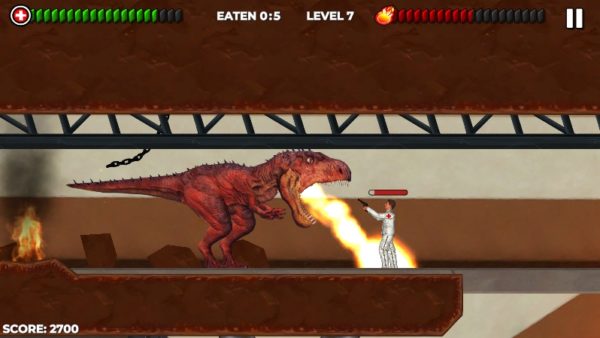 Each level has a single objective which must be fulfilled. That’s right – just a single objective. There aren’t any quest logs, optional missions or side quests here to take on. Just you, a series of humans who would probably rather not be eaten, and a dinosaur who strongly disagrees with their philosophical position on that issue. It’s not always humans; sometimes the dino must destroy lab equipment (those pesky scientists), and sometimes it’s vehicles which find themselves in T. rex’s sights.

Whatever you’re destroying, destroying enough of it will net you a pretty amount of points, which are Rio Rex’s chief stock in trade. It’s very much a “what you see is what you get” kind of game; there aren’t any frills or extra bits like unlockables or upgrades. Each stage merely tasks you with obtaining up to three skull tokens, which are…well…skull tokens. They’re mainly ornamental, but they’re nice as trophies. If you miss one or two tokens in a stage, you can always repeat it to try for a higher score. 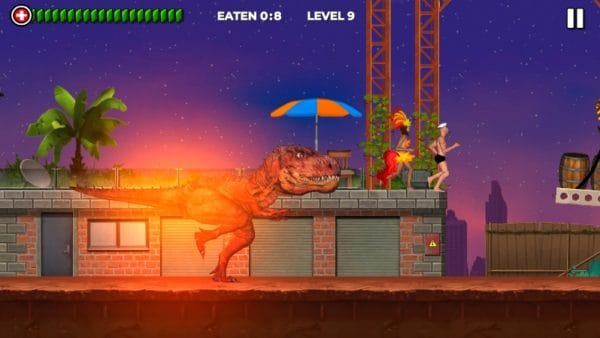 Whether you enjoy Rio Rex will essentially boil down to two things. Firstly, you need to be the kind of person for whom violence in video games is its own reward. If you’re seeking a deeper narrative experience, or you want a game in which you can extensively customise and power up your protagonist, you’re definitely better off looking elsewhere. Secondly, you’ll need to be able to stand a bit of repetition, and your eyes probably shouldn’t be looking too hard for genius graphics work.

The visuals are a touch inconsistent, ranging from weirdly realistic (the titular dino) to slightly under-represented (the humans and some of the backdrops). Of course, a game like this featuring overly realistic humans would really upset the gleefully chaotic tone, so it’s probably for the best that the characters are a bit more stylised. Still, some more visual fidelity would be nice, especially in the more visually spectacular moments such as those featuring exploding vehicles or collapsing skylines.

Rio Rex is also quite a samey game. That’s not necessarily a disadvantage; sometimes, zoning out with a bit of monotonous destruction is all one needs to round off a particularly bad day. That said, if you’re searching for a sprawling epic which defies genre and straddles multiple different gaming experiences, Rio Rex won’t provide that for you. This is definitely a game where it’ll help to know what you’re getting into when you start getting into it. 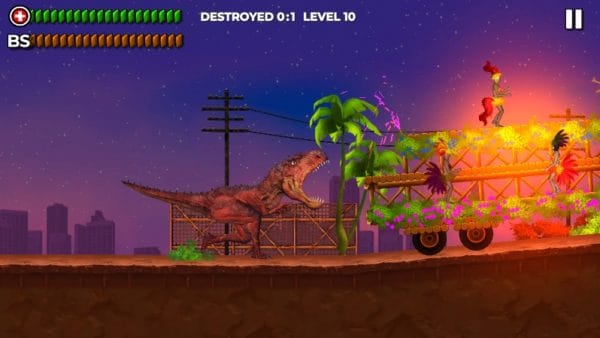 If you prepare yourself for a fun destructo-tastic thrill ride through some themed stages with an absurdly overpowered protagonist who can breathe fire (yup), then there’s plenty of enjoyment to be had with Rio Rex. It’s a fun game that doesn’t overstay its welcome and knows exactly what it is, which is something to be said in this all-things-to-all-people age of ours.