Portal 2 — Now Being Used to Educate Your Kids 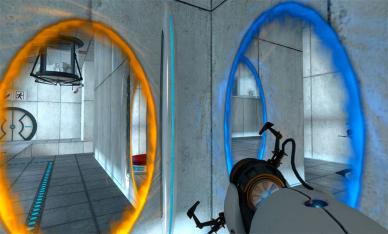 The term “educational video game” brings to mind developmental gems such as “Number Crunchers” and “Super Grammar Games” from the early 90’s. However, today’s generation of young minds is apparently being given the opportunity to learn by playing popular puzzle game Portal 2.

Sound crazy? It’s not, at least not according to Gabe Newell, the co-founder of Valve. He plans to make Portal 2 into an educational tool by developing specific types of Authoring Tools geared towards educating children. Gabe laid out these plans during the Games for Change festival, in a very well-thought-out speech. According to him, the physics feature of Portal 2 is what could make it a very valuable tool for education. As he explained it:

It’s a lot easier to get people excited about it [education] if they’re on the moon and they get to throw the rock at the piece of glass that breaks the glass that lets all the robots fly out.

Seriously. Kids these days are so spoiled. My physics homework involved paging through musty decade-old textbooks and copying down formulas. No, I’m not jealous at all.