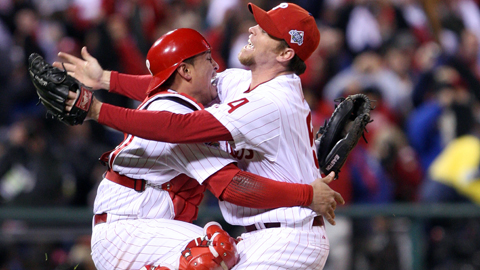 Although I now live in New York, I originally grew up with Ryan in South New Jersey, right outside of Philadelphia. This makes us huge Philadelphia Phillies fans (albeit I’m a Giants fan come football season) and after last night’s World Series game, we’re happy Philadelphia fans. The Philadelphia Phillies have finally broken the curse of William Penn and have paved the way for the Flyers and Eagles to win championships. No one cares about the 76ers, so no matter there. There will be a huge ticker tape parade down Broad Street come Friday, so if you’re anywhere near Philly, make sure you stop by and party for us.

If you’re a fan of baseball, you couldn’t have asked for a better World Series in 2008. Go Phils!