Oldest Known Monopoly Board Sells for £90,000 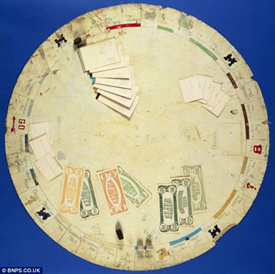 Monopoly is, far and away, one of the most popular and successful board games of all time. Originally known as The Landlord’s Game, Monopoly has remained more or less the same since the 1930s. The early Monopoly boards weren’t boards at all, but oilcloth cut into a circle with the familiar markings that are commonplace on today’s boards. It has been a lifelong dream of mine to own one of these oilcloth boards, but seeing what they go for nowadays I think it’s slightly out of my price range.

One of those boards sold by the Forbes estate at a Sotheby’s auction for £90,000 (or $145,000+). It’s an impressive amount, but well worth it for what is believed to be the earliest known Monopoly board known to have survived, according to a Sotheby spokesperson:

It is the earliest [Charles] Darrow set known to survive, the only one of circular shape, and the earliest to include rules. The circular and handmade game-set is one of the most significant artefacts of this extraordinarily popular game.

There are dozens of versions of Monopoly on the market. I, myself, have the Nintendo, Star Trek, three Star Wars, 75th Anniversary and a special Michigan State version of the game… and I’m a nerd…