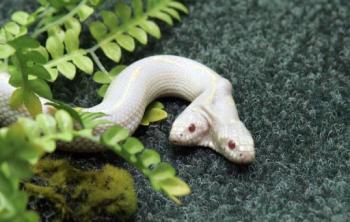 No, this isn’t a clever practical joke, or something out of a B movie from the Sci-Fi channel — there’s a snake at a Ukrainian zoo that has two heads.

Even weirder? The two heads can think and act separately. They even go as far as to “steal food” from each other. This has caused the zoo officials to feed each head separately, in order to prevent fights.

… Yeah. I just got the same mental image you did, and it was hilarious.

The snake (snakes?) is an albino California Kingsnake, a type of snake that actually hunts and eats other reptiles. So, theoretically, zoo officials are worried that one head could instinctively try to kill the other one.

The snake is on loan from a zoo in Germany until September.