Mobile and the perpetual renewal of the public sphere 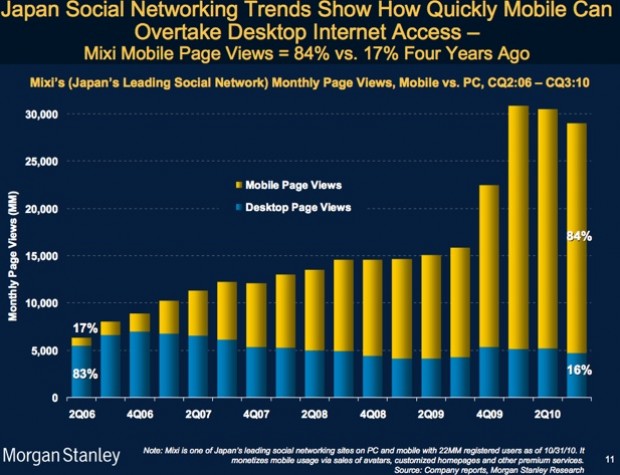 A telling slide from Morgan Stanley analyst Mary Meeker’s presentation at the Web 2.0 summit, showing how quickly mobile web access has taken over user experience of the Internet in Japan. It’s striking that the time scale here is reckoned not in years, but in quarters since 2006. Elsewhere, Meeker projects that sales of smartphones will outstrip PC purchases in two years. It’s clear that the shape of Web access is changing dramatically.

A couple of things. First, the digital divide: it’s still an issue. But when we first started talking about it more than a decade ago, few would have envisioned the plethora of inexpensive new tools that would emerge to bridge it–a powerful lesson in the limits of prediction and the explosive possibility of technological innovation. Second, a comparison to the rise of printing in Western Europe from the fifteenth to the nineteenth century: the first books were the province of early adopters–scholars, aristocrats, and the Church. Innovations along the way opened up the book to other users. We might say that the steam-driven press was like the transition from mainframes to PCs, and the rise of the mass-market paperback equivalent to the emergence of the mobile phone. Apps mattered, too: in the case of printing, the novel and the newspaper came along to offer new user experiences. But with printing, these changes took place over centuries, then decades; with silicon chips, we’ve gone from a timescale of years to months in a generation.