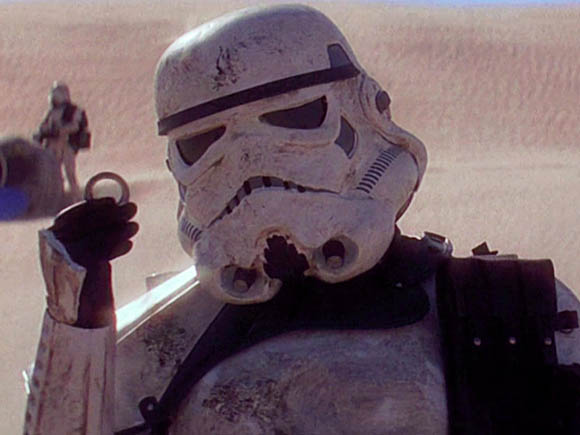 The line between fanfic and official Star Wars canon becomes blurred with every passing day, but purists know how to separate the fiction from slightly-truer fiction. The truth is that in some way or form, every character that appeared on screen for more than a millisecond (and even some among those) have developed complete backstories thanks to the vast expanse of the Star Wars universe.

Topless Robot chose ten of these very minor Star Wars characters who have developed entire life stories. Included, and one of my personal favorites in this collection, is the Stormtrooper that said “Look, Sir. Droids!” upon finding a metal ring while the Imperial troopers scour the surface of Tatooine. This particular Stormtrooper even has a name: Davin Felth. Check out what Topless Robot says about this craziness:

His Wookiepedia entry is eight times as long as the Wikipedia entry on famed Dada sculptor Jean Arp. It includes pointless details like what color his duffel bag was when he came to basic training (blue), how much weight he lost in basic training (15 lbs), how long he trained for the desert corps after AT-AT training (three months), and that Davin didn’t like it when his Stormtrooper unit killed Jawas.

I don’t care how ridiculous this might be. I love every second of it. Hit the link for more.