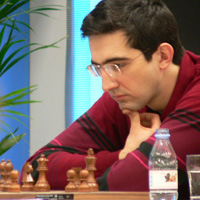 Well, at chess, anyway. Vladimir Kramnik lost 2-4 to the multi-processor version of Chessbase’s commercial software Deep Fritz at a tournament held in Bonn, Germany. Kramnik was able to hold an earlier version of the software to a draw in 2002, but this latest defeat may preclude a rematch. Monty Newborn, a professor of computer science at McGill University, told The New York Times: “I don’t know what one could get out of it at this point. The science is done.” Newborn also said, however, that poker and go, an ancient Chinese strategy game, are where the future development of computer game-playing software is likely to concentrate. — Mike Payne