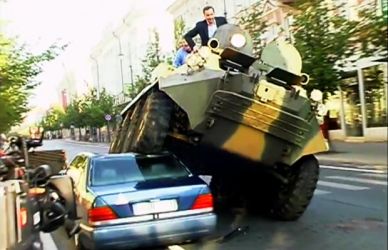 Us Americans have always known that politics are handled a bit… differently over in Europe. A great example of this is the parking policy of the mayor of Vilnius (which is the capital city in Lithuania, for those of you who flunked Geography). Fed up with “expensive” cars (such as a Ferrari) parking in illegal areas, the mayor decided to fight back. With stricter legislation? Nah. He got in an epic tank and started running them over.

“That’s what will happen if you park your car illegally,” he says at the end of his car-crushing video.

Okay, so this was obviously staged — I’m sure the shocked gentleman in the video wouldn’t be so nice about having his car crushed. However, it’s interesting to think about how a video like this would go over in the USA. Can you imagine the mayor of New York City or Chicago threatening to crush illegally parked vehicles with a tank?