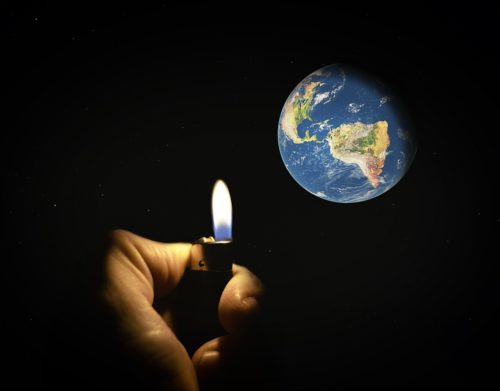 People have been blabbering about global warming since forever. But how much do we actually know about it? The fancy terminology and jargon used around leads to zero awareness of the real problem at hand. We also choose to be ignorant towards it. It is like a ticking time bomb, just time being the difference. The bomb will go off in a few seconds but earth still has time left. Nature is giving us time, hints to realize our reckless past and to take a U-turn. If change is not visible then it is because of our casual attitude towards this issue which will lead to a catastrophe later on. Let’s ​stay ignorant no more. Let’s begin.

To understand global warming, let’s break it up into ​two parts: global-meaning around the whole world and warming-rising temperature. Global warming in simplest words is steady rise of temperature of the earth due to greenhouse ​effect. Greenhouse effect is trapping of heat by the atmosphere which leads to global warming. Heat gets trapped due to carbon dioxide in the air. It reflects the sunlight back to the earth’s surface and does not let it escape the atmosphere. Now this is necessary for sustaining life but excessive carbon dioxide leads to excessive heating which is harmful for the environment. The question that arises now, is that where is all that carbon emission coming from? The answer is not so hard to guess, us humans only! We are living a lie that our actions are not contributing towards global warming that is changing the climate around us. The rising temperatures, scorching summers, colder winters are the result of our actions only. Man for his own selfishness is cutting down trees thus degrading the environment which in turn has led to greenhouse effect and global warming.

There is an index to measure the individual carbon emission rate and index is called Carbon footprint. Even leaving a switch on when going out of the house releases CO2 into the atmosphere. Knowingly or unknowingly we are doing similar blunders.

800 long years it apparently lasts, the amount of heat trapping CO2 that we release into the atmosphere!

The major CO2 producing causes include combustion of fossil fuel, industrial emissions, vehicular exhausts, heat and electricity generation. 87% of it is contributed by burning of fossil fuels only.

These were the direct causes of carbon emissions. But it is the indirect ones that go unnoticed. They are not a major contributor of CO2 emissions but they are the ones which can still be controlled at each individual level.

To calculate your accurate carbon footprint you need to include all the small activities of your daily life. Housing, electricity, food consumption, transportation​ are some of the common areas of our life. Each input factor is multiplied by its appropriate emission factor.

Calculate your carbon footprint today itself, and get a reality check. Maybe this would push you to put efforts to stay cool and green.