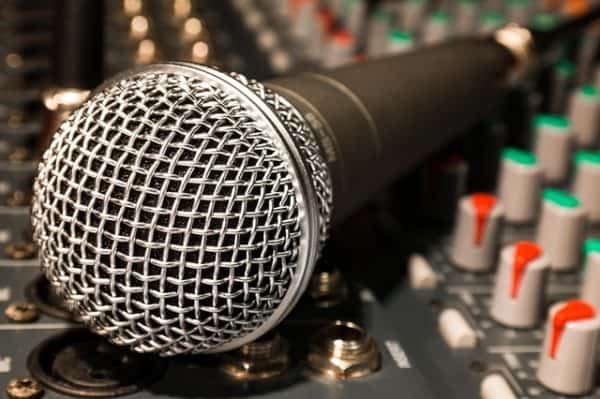 IK’s iRig Mic HD 2 is the updated version of the previous iRig Mic HD. The new version ostensibly packs more features. The iRig HD digital condenser microphones remain the only handheld products that can be used with Apple devices such as iPads, iPhones, and Macs. It works with PCs as well. If you are a serious podcaster, producer, or a YouTube musician, this is a solid product to consider. Read below for a brief review of the product.

The iRig Mic HD 2 is designed very professionally. The manufacturer has certainly upgraded the design by giving the HD 2 a metal body, while the original iRig HD had a plastic body. So the HD 2 feels heavier and more like a real microphone. Professional users will appreciate the classic form factor the metal body provides. It’s ergonomic and easy to hold for long periods.

The microphone comes with a holster, a carrying pouch, and two connecting cables. The headphone output has volume control, which means the user can always monitor the sound and send signals to recording devices. The volume control works with the latest iPhone.

The HD2 is callable of recording sound up to a sample rate of 96kHzand with 24-bit resolution. The capsule of the mic is gold sputtered, making it capable of recording sounds in the frequency range of 20 Hz and -3 dB. The mic can withstand sound pressure up to a whopping 125dB. If you are a hard rocker or a sound artist, you won’t have to worry about recording extremely loud noises. The mic is capable of detecting cardioid pickup patterns. So when you record loud noises, the mic can reject unwanted sounds from the back.

The main downside is that the HD 2 only has an analogue audio jack. It’s not an issue for professional recorders, but it will be disappointing for those who want USB-C or Lightning ports. It’s a digital microphone so you cannot wirelessly connect it to a device either. But if analogue is not an issue for you, then this microphone will pose no problems.

The iRig HD 2 will be most useful for professional sound recorders. If you are a musician, podcaster, broadcaster, vlogger, interviewer, or a sound technician, then this microphone’s features will be extremely useful. The mic is capable of recording a wide variety of sounds, including very loud sounds. The mic can record gains without picking up unwanted noises. The mic can re-route sounds to a mixer or a PA system just fine.

The overall design is ergonomic with a great form factor. The only downside spotted is the analogue audio jack which won’t work with the new USB-C or Lightning ports in smartphones. Still, if you have a device with an analogue jack, then this mic would be one of the best to own. Overall, this is a wonderful product that would benefit frequent and professional users the most.