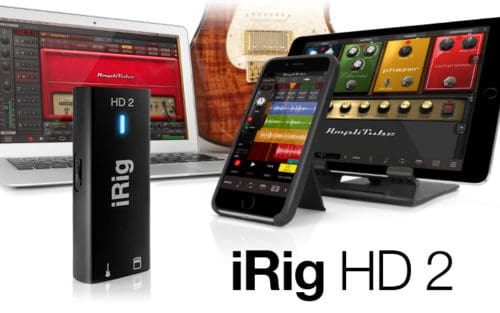 For many serious musicians, stepping into the digital age is not the easiest decision to make. For some, it can feel as though the essence of music is being lost with all the devices that it is getting transported through. Many have changed their mind, however, with the release of the iRig HD 2. This miniature piece of equipment was a suitable digital guitar interface for many devices. IK Multimedia has taken this initial prototype to the next level with the launch of the iRig HD 2. Let’s take a look at what it has to offer:

The most important thing, of course, is just how good this guitar interface is when it comes to sound quality. Thankfully, the answer is very. Despite being quite diminutive in size, the iRig HD 2 offers up a 24-bit analog to digital conversion. This is compounded by the 96 kHz sampling rate – the best in the business. This sampling rate is a far cry from where the original iRig HD started out – at 48K. There is also an input gain control that helps to narrow in on the ideal amount of signal when you are recording.

The iRig HD 2 may have maintained and even superseded the high quality of previous versions, in terms of being a low-noise, high-definition guitar interface . However, it has managed to one-up its predecessor. This is by being compatible with the iPhone 7. The iRig HD 2 is still compatible with iPad, Mac, and PC, but none of these have seen as drastic a change as the iPhone 7. As you may have heard, the iPhone 7 will not be featuring a headphone jack. This may prove to be a problem for some devices, but not for this interface . This is because the iRig HD 2 is equipped with a lightning cable that comes attached to a headphone output jack. The jack, in turn, has ainterface  and level control.

With the iRig HD 2, you do not have to limit your guitar playing to your basement. Instead, you can take it on stage with you. This is because it comes fortified with an instrument-level 1/4″ Hi-Z Amp Out jack, which overcomes the need for specialized adaptors. Instead, the output is managed by the FX and Thru switch. When the FX is switched on, it is responsible for the sound coming from the device. The Thru function deals with the recording of the dry signal. To help with your stage presence even more, the interface comes with a microphone stand mounting clip and Velcro strip.

In addition, by getting the interface you will also be given free access to the full versions of AmpliTube 4 and AmpliTube for your mobile devices. Even if you already have the free version, you can update your device to the premium version. The full feature version includes 26 gear models.

What You Need to Know

Those are all of the highlights of the iRig HD 2, but here are some other things you should hear about. First off, although it is a little larger than the previous iRig HD, this interface is quite compact as well. It is incredibly light and can easily fit into your pocket. It can also be employed with line level signals from mixers, keyboards, and synthesizers. The iRig HD 2 does not have its own power source. As such, it is dependent upon the device to which it is connected. It draws its power from the device.

All in all, this is really a great accompaniment to any budding musician. The crisp sound and multitude of features make it a must-have if you are a music lover.