IOPS X11 is an iPod, or at least it looks like it… 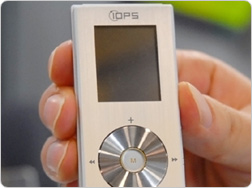 Wow, a new iPod… Oh wait, no, it’s just a new IOPS media player that is just trying to mimic the iPod. Sorry everyone. So we know about the illegitimate knockoffs, now how about the legitimate ones. This X11 media player basically has the same controls as the iPod, just without the scroll wheel. One nice thing is that it has an aluminum case, not the scratchable plastic that so many devices come in today. Also, the X11 will support AVI, DivX, MPEG-4, WMV, and XviD file formats at 30 fps. It has a little 1.3″ screen to play your movies on. Don’t you love watching movies with a magnifying glass? Oh, you don’t? Well, then you probably won’t want to use this as your video player. As for music file formats, the X11 will be able to play MP3, OGG, and WMA files. No AAC support, but if you don’t have a Mac, you won’t really have to worry about that problem. So for extra features (which seem to be moving toward standard), it allows for JPEG viewing, and it has a built in FM tuner. No AM talk shows for you. As for flash drive size, it looks as if it will be released in 1/2/4GB editions. No launch dates yet, and the same with pricing. — Nik Gomez