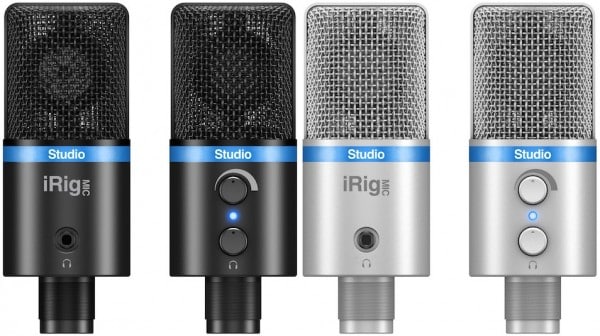 IK Multimedia has introduced its latest digital microphone the iRig Mic Studio. This is yet another quality, high-end product from a company known for its superior range of digital microphones. Designed to improve the iRig Mic HD, which is IK Multimedia’s flagship, iRig Mic Studio is a compact, high quality and versatile mic that can be used for a myriad of recording applications.

What’s in the package?

The iRig Mic Studio comes packed with cables for hooking it to iPad, iPhone or iPod devices that have lightning connector. You also get a Micro-USB OTG cable and ordinary USB cable for connections to Android devices. There is 30-pin dock connector cable that can be used with other devices. IK Multimedia has ensured that the cables supplied can also be used with older iOS devices. They are also compatible with iRig Mic HD. The iRig Mic Studio package also includes portable desktop mount and a storage container for the mic when it is not operational.

The mic has an output (headphone) located right on the front. It has its own audio control level located on the back for easy access. Like the iRig Mic HD, the iRig Mic Studio has a LED indicator that shows the connection and power status. It also has a level indicator for gain adjustment. Connecting to your iPhone or any iOS devices is easy- you only need to plug a line and run it to the lightning port of the device. The Mic draws power from the device it is connected to. Standard Core Audio is compatible to work with iOS recording apps like the inbuilt voice recorder of the iPhone itself or the Garage band app. It also works well with the IK Multimedia’s own apps for recording such as VocaLive and SampleTank.

IK Multimedia released the iRig Mic Studio with a special app, Mic Room, which actually enables users to showcase their creativity by using various microphone profiles. This means that besides recording sound with the iRig Mic, you can apply various models to make using other configurations easy.

The iRig Mic Studio offers superior acoustics that are on a par with high-grade studio mics. It costs $180, which might be a lot for an average recording artist or podcaster. Hey, remember this is a high-end recording studio with a superior performance. The IK Multimedia’s system of apps is a bonus because it is already tweaked to the profiles of the brand’s accessories, and includes content and features attuned to devices like iRig Mic Studio and its predecessor. The iRig recorder in particular works well in tandem with this digital microphone, and is probably your best bet if you are looking for an easy to use one-stop stereo audio solution for recording audio, applying effects as well as editing.

Audio professionals are beginning to consider using digital mics instead of analog mics because of their compatibility with iPod, iPad, iPhone and Mac. We can also see several studios shunning the analog systems of yesteryear in favor of all the goods that an out-and-out digital environment can deliver.

The iRig Mic Studio comes highly recommended for people who are moving from analog recordings to digital recording environments. We can use three words to describe the iRig Mic Studio: Superior, Versatile, and Quality.