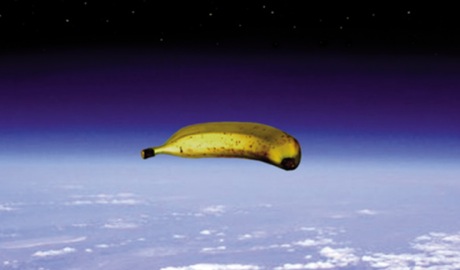 Amusingly enough, artist Argentinian César Sáez is in the midst of developing a Geostationary Banana that will float over the state of Texas for approximately one month — and it’s all in the name of art. Sáez’s website justifies the banana thusly: “a banana in the sky is an odd celebration to spectacle, to the advertisement industries; and to the Warhol Art.”

The banana will be almost 300 meters in length and it will control itself with the help of two gyroscopes whilst floating between the high atmosphere and Earth’s low orbit. Texas residents will be able to view the gigantic banana day and night, which will undoubtedly fill them with a sense of pride given their affinity for all things oversized.

An August 2008 launch date has been proposed, but at this point nothing is set in stone. — Sean Fallon