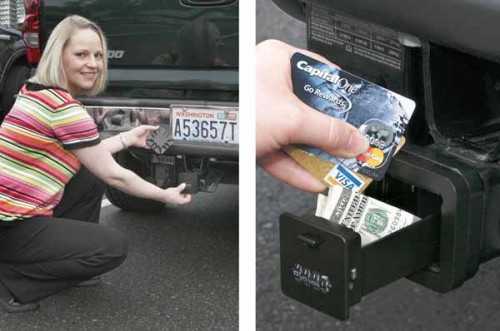 As far as truck accessories go, I’d much rather have something useful, such as the Hitch Safe, rather than a pair of saggy balls hanging from the back of my bumper. The ingenious Hitch Safe slides out after its two security bolts are unhinged to reveal a little cubby for anything you might want to hide in the rear end of your truck.

And since its rust-proof, there’s no worry of not being able to access your hidden goods due to the elements. Well, unless your truck is covered in rubble from some disaster. But come on, it’s a safe, not a force field. What would I feel comfortable storing in my Hitch Safe? Probably not cash, but maybe a spare key or two, just in case.