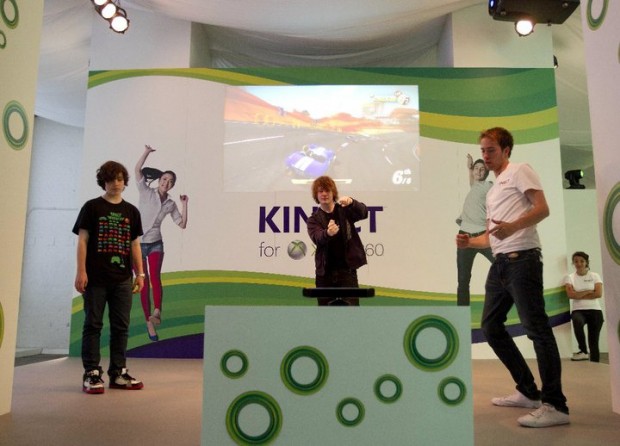 The front page of the Sunday Arts & Leisure section of the New York Times featured an article by Seth Schiesel called “Motion Sensitive” on the impact of the Kinect and other motion-sensitive controllers on the gaming of experience. “As video games swap controllers for players’ bodies,” the tagline announced, “the experience edges closer to art.” Schiesel explores not only the advent of the Kinect, but enormous success of the Wii and the continuing appeal of games like Rock Band and Guitar Hero. He name-checks John Dewey, the early-twentieth century pragmatist philosopher whose ideas about art and aesthetics have appeal to theorists of new media. Art is not something that inheres in an object, Dewey argued, but an experience, a thing that “takes places when a human being cooperates with a product,” as Schiesel quotes.

But Dewey’s account of art isn’t complete. It stresses a harmony between object and audience—but harmony doesn’t begin to define art in its totality. Schiesel seems to be saying that art happens when we forget the frame and slip into an enchanted spell of seeming transparency, when the distance between an object and our consciousness seems to fade away entirely. It’s an experience that’s technologically “tweakable”—with better 3D glasses or faster refresh rates, enchantment becomes more complete. But does it necessarily become more artistic? Since when is technological advancement a prerequisite for artistry?

When factory-made pigments became available in the nineteenth century, artists found new ways to use paint. They took their easels out pf the studio and into the world, and began to paint with an immediacy and brio previously only found in drawing. Out of their encounter with the new technology of commercial paints, the movement known as Impressionism was born. And yet no one in the nineteenth century ever would have said, “as painters swap handcrafted pigments for ready-made paints, painting edges closer to art.” In retrospect the argument sounds even more absurd—it’s clear to latter-day eyes that Impressionism, for all its evocative richness, is not “more artistic” than previous modes of image-making. But that’s the kind of argument Schiesel makes in his tagline—and its confusing effect is felt throughout the piece.

Schiesel equates the new controllers with art partly by creating a straw-man we might be tempted to call Art 1.0. “With no media do humans cooperate so intimately as video games,” Schiesel writes—words that only makes sense if written by someone who has never danced or sung or played a musical instrument. “With products like Rock Band 3 and Kinect, the art is becoming a real experience” (my emphasis). But in fact, the intended uses of these controllers appears anything but liberating. A gamer pretending to hold a steering wheel or leaning to starboard in anemic mimicry of surfing doesn’t look like a artistically emancipated person to me.

In fact a striking quality of the new controllers is their capacity to infantilize players, offering a return to the kinesthetics of early childhood play. Young children, after all, find it easy to evoke the experience of driving by sticking their fists out and spinning them around in imaginary circles. We lose access to that sort of sympathetic magic as we mature; maybe the Kinect works its spell in part by reconnecting us to the kinesthesia of the immature brain. But we shouldn’t fool ourselves into thinking that the Kinect is somehow getting us closer to “the real.” For adults, after all, such actions are highly unnatural. Games developed for the Kinect don’t get rid of the controller; they teach us to turn our bodies into controllers. Perhaps the return to infantile modes of play can be healthy, even liberating—although such emancipation is more likely if we remain aware of the peculiarity of the experience. And that’s where artists can help us.

Some of the swiftly-proliferating Kinect hacks work by offering a glimpse of the uncanny and unnatural side of the new motion-based controls. They show us that in the dawning awareness of the machine we’re sources of seismic impulses bathed in a cockeyed parallax of infrared and visible light—we’re grotesque, ungainly creatures. Such hacks are works of art that proceed not by enchantment, but estrangement. They’re part of a tradition older than the Wii or the accelerometer—indeed older than video games.

I’m not saying that Kinect and the other new motion-based controllers aren’t artistically viable—much less am I saying that video games are not art. Indeed, video games have long been a rich medium for artists. But it’s the artist, and not the controller, that makes the art. New technologies offer rich new resources to artists, to be sure, as the flourishing Kinect-hacking scene shows. We don’t need allegedly transparent technologies to give us a “real experience”; we’re having real experience all the time. Button-pushing is real experience. One of the jobs of the artist is to wake us up to the reality in which we’re already immersed. Artists are doing this by making use of the full historical sweep of gaming technology, from the boxy pixels and chiptune music of 8-bit gaming systems to the latest motion-sensitive controllers. Video games don’t need to become art; they’re art already.