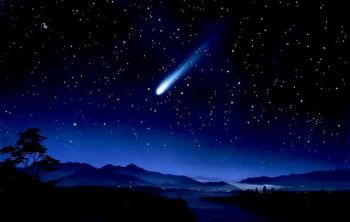 Even though Halley’s Comet isn’t scheduled to appear in our solar system for another 50 years (it should appear mid 2061), you can still check out what it’s left behind. Twice per year, the leftover debris from Halley’s Comet puts on a spectacular show for our planet.

The October meteor shower caused by Halley’s Comet is called the “Orionids”, and is scheduled to peak sometime next week. By most estimations, your best chance to see high meteor activity is on October 22nd, in the early pre-dawn hours. During this time, you should be able to see from 20-25 meteors per hour.

However, for the next two weeks, you should be still able to catch a glimpse of at least a few Orionid meteors if you watch the sky.