Does your iPod Classic use Toshiba or Samsung HDD? 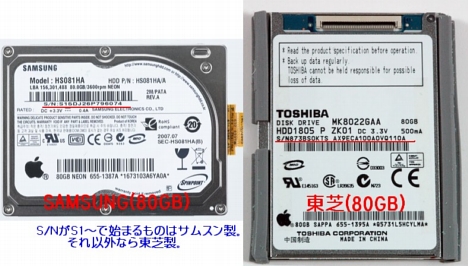 It is for fact that companies can source modules from different suppliers for the same product, the best example would be the screens of Sony PSP (Sharp and Samsung). In the hard disk world, Toshiba is one of the loudest and proudest players, they’re making such a big fuss about their deal with the fruit company. Samsung comparably seems to be a bit more modest about it.

When Apple announced the 80GB iPod Classic, everybody expected that the sole supplier should be Toshiba… but some fans in Japan are reporting that the 80GB iPod Classics with serial number starting with “S1” actually use Samsung HDD, while the rest are covered by Toshiba. We do not have 2 iPod classics with us, so we cannot tell you the difference in performance (if there is any). One thing for sure is that the unit cost would be different. — Sam Chan