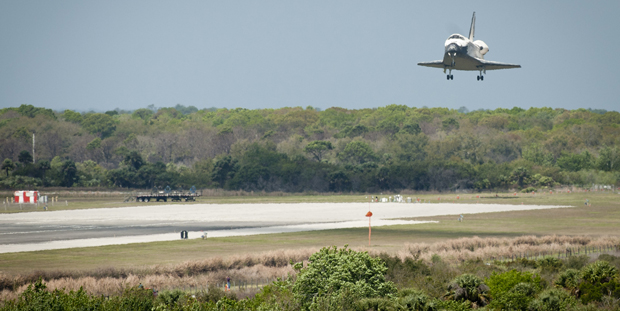 And that, as they say, is that.

The Space Shuttle Discovery has returned to Earth for the final time, ending STS-133 and concluding the final flight of the oldest and most traveled space shuttle still in service. The shuttle landed at 11:57am EDT at Florida’s Shuttle Landing Facility.

During an in-flight interview, mission specialist Nicole Stott lamented on the importance of being involved in Discovery‘s final mission.

It really is an honor and a privilege to be able to fly Discovery at any time, and the fact that we’re on this final flight really stands out to us. It’s a real opportunity to celebrate the really great things that have gone on with Discovery. I think when we walk away from her on the runway, there’s going to be tears in my eyes. I worked with her at KSC and the chance to fly her has just been a real, real privilege.

Discovery, along with Endeavour and Atlantis, will be retired by the end of this year. On April 12th (the 30th anniversary of the shuttle program), NASA will announce where each of the three remaining shuttles will be sent to be viewed as museum exhibits.

It’s presumed that Discovery will head to the Smithsonian.