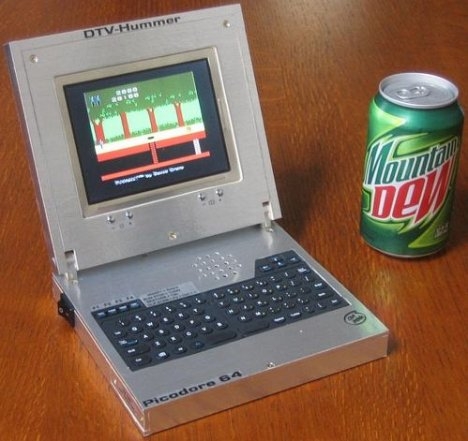 Sure, NES was the introduction to video games for most children of the early 90’s (born in the mid-late 80’s), but what about those of you born in the late 70’s and early 80’s? True, many of you would likely answer Atari or some equally low-bit system, though a nice chunk of you probably remember playing the old C64, the Commodore 64 computers. What use to be only available in a larger then life box has now been minimized to the size of a Gameboy Advanced. The forum in which it was found in describes it as a Commodore PDA, which is actually a pretty cool idea. And being built with a relatively minimal amount of supplies makes it even cooler. You know the thing is small when a can of Mountain Dew looks imposing. — Andrew Dobrow