Catholic Church: Internet Has Led to Rise in Interest in Satanism 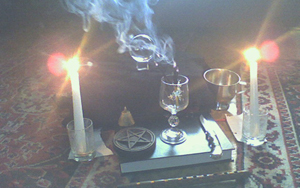 The Internet is a pretty wretched hive of scum and villainy, to be sure. I’ve seen things online that, frankly, have made me question how we haven’t devolved yet. Then again maybe we are. After all, evolution takes a really, really long time. Regardless, I’m not the only one who sees the Internet as a tool for evil, as the Roman Catholic Church has warned that the Internet has led to a rise in the interest of Satanism.

Like any other religious idea, there are many different organizations devoted to Satanism, including the proper Church of Satan, the First Satanic Church, the Tempe of Set and the Order of Nine Angles. According to Carlo Climati of the Regina Apostolorum Pontifical University in Rome, Italy, the Internet has made it much easier to find information about these groups:

The internet makes it much easier than in the past to find information about Satanism… In just a few minutes you can contact Satanist groups and research occultism. The conference is not about how to become an exorcist. It’s to share information about exorcism, Satanism and sects. It’s to give help to families and priests. There is a particular risk for young people who are in difficulties or who are emotionally fragile.

The openness of information has led to a rise in interest in both the occult and in exorcisms, which was a major point of discussion at a conference in Rome. Pesonally, I think this is a simple matter of the church using the Internet as a scapegoat. Last I recalled, the Internet did not drive anybody to join a particular religion (apart from the Church of the Subgenius, maybe), and the information these people are looking up would just as easily be available in libraries or book stores…