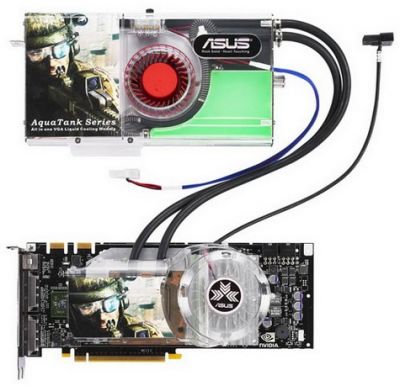 Asus has announced its Aquatank graphics card. A new option for cooling an overclocked GeForce 8800GTX card with a water cooling method. The new Aquatank is said to run 12 degrees cooler then a reference thermal module.

The Aquatank clears out warm water from an overclocking 8800GTX, enabling the GeForce graphics to be up to 11 percent faster then when its running hot. Testing showed an increase in performance from 575 MHz to 630 MHz. Quite a jump for a GPU clock.

No pricing or release date have been announced, but the release should please some GeForce hardware fan boys who love working their cards to their maximum power. — Andrew Dobrow