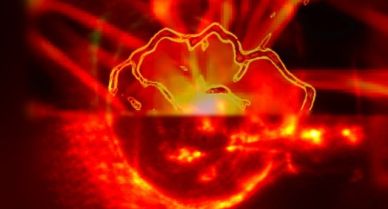 In an exciting new development, astrophysicists have used emerging technology to successfully provide a simulation of how galaxies form.

The simulation uses a combination of carbon rods and red lasers, which are contained in a laboratory setting. The simulation provides a fairly accurate depiction of the magnetism of newborn galaxies.

In galaxy formation models, a gravitational nucleus is formed out of cold dark matter. Ordinary matter in the form of gas collects around the nucleus and, as it collapses, it heats up. The relatively rapid gravitational collapse sends shock waves through the gas, blowing some of it away from the protogalaxy, but driving star formation in the process.” — Ars Technica

Until now, astrophysicists were having a lot of difficulty with galaxy simulations. These difficulties were a result of two things — a lack of detailed information about galaxy formation, and the complexity of the features of a galaxy. Though this simulation doesn’t entirely overcome these hurdles, it’s definitely a step in the right direction.