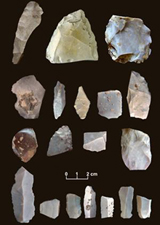 A recent finding of artifacts in Texas may very well prove that mankind had been occupying North America as far back as 15,500 years, 2,500 years before the Clovis. The fact that the objects found, mostly spear-shaped, lack the refinement of the Clovis tools that have been discovered throughout the years may provide evidence that those who left these tools behind were the ancestors of the Clovis people. This would lend credence to the belief that the first humans in North America came over by boat, not by Beringa.

As with any theory, there are detractors. One of those is University of Oregon’s Dennis Jenkins who, while impressed with the findings, cautions against rushing to conclusions about the origins of the artifacts:

Nobody will argue these artefacts aren’t real, but the question is whether they were really found exactly where they belonged or whether they settled from above.

While it’s possible that these tools could have slipped through cracks made by geological activity or plant roots, the team doesn’t feel that this is a likely scenario. In the eyes of Michael Waters, the lead author of the study and worker on the project, this likely proves that the Clovis were not the first people here:

I think we are on the edge of a paradigm shift now. We’re past the Clovis-first model. We have robust evidence of people here before Clovis that is in a secure geological context and well-dated. Now we can seriously sit down and develop a new model for the peopling of the Americas.

It’s certainly an interesting find, but… well, nothing. I have nothing negative to say about this. Well done by everyone.