An Amazing Photo of Two Galaxies About to Collide 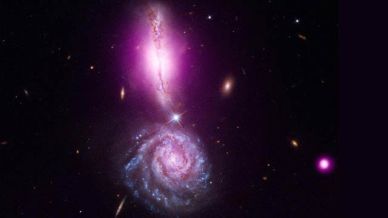 It’s very rare that we can witness the beginning stages of an epic galaxy collision. Two far-away galaxies called VV 240 North and VV 340 were captured in a stunning photo that displays the very early stages of a collision.

The photo was created using data from NASA’s Chandra X-ray Observatory (which is seen in purple) combined with data from the Hubble Space Telescope (seen in red, green and blue).

Galaxy VV 340 is about 340 million light years away from Earth, which is significant — because the collision itself is probably already in its later stages. However, since we’re limited by the speed of light, we get to see the amazing photo of two galaxies which may already, in reality, be intertwined.