3 Gadgets to Transform You Into Mr Bond 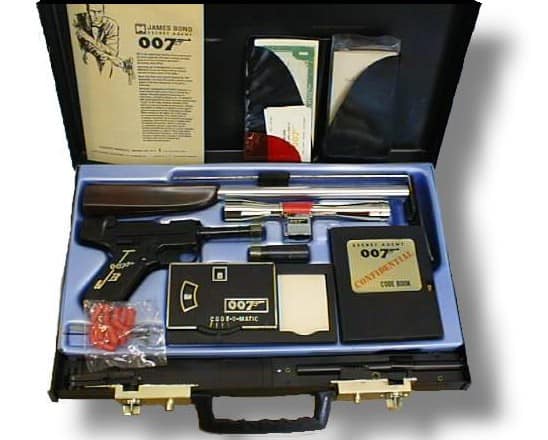 You’ve been hiding in bushes and jumping out at passers-by, yelling, “So it’s you, Blofeld!”

You’ve thwarted your next-door neighbour’s plan to wash their car in peace by trying to commandeer it for a “high-speed chase”.

And every night you dream of being honoured by her majesty, only to wake up saluting your still sleeping girlfriend.

There must be an easier way to sate you appetite for James Bond than this.

Indeed, you don’t have to remain a daydreamer all your life. Thanks to the wonder of the internet, you can kit out your home with cool gadgets without having to bother your neighbours.

So, what can you get your master spy mitts on?

Keep an eye out

If you need to keep your spy den under tight observation, then covert cameras are available from most good retailers – and they come in all manner of shapes and sizes.

Take this gadget, for example – a DAB radio, fully functional, with a camera inside. Anyone could switch it on or off without even realising they’re being recorded. It’s perfect for making sure the kids are behaving, that your babysitter isn’t nicking booze from the fridge or keeping track of any shifty burglars.

The keys to knowledge

Imagine if James Bond had been created today. He’d probably be some spoddy hacker downloading files from the internet while struggling to ask women out on a date. Like it or not, the world is run on computers nowadays, and we’ve got a few gadgets to help you.

Just picture the scene – you have to discover the password for a super-undercover mission. Pull out the Keysafe Pro, a keylogger that will track every key pressed on a keyboard. It’s a sneaky move, but could prove vital.

Just be sure not to use it for anything dodgy, eh?

Q must be cursing himself for not coming up with Google Glass, the latest piece of high-tech kit making waves in the industry.

A pair of spectacles that can be worn at any time, Google Glass allows the user to capture photos or recordings in the literal blink of an eye, as well as letting people check the internet while on the move, or keep track of their heart rate while exercising.

There are, however, a number of controversies concerning the tech. Having it on at work, for instance, could make bosses concerned that you’re sharing sensitive data to the world, while many have claimed it could cause our already faltering attention spans to diminish ever further.

No matter what the controversies, there’s no denying that it’s impressive tech. You could be Googling someone as you talk to them to fish for conversation topics, checking restaurant reviews online in an instant or finding discount codes for the cinema as you stand at the ticket booth.

Really, what more could a budding spy need?