Yes, we know, lucky for some, not for others but if you ask us there are more than a few reasons why this Friday the 13th is pretty awesome. Take a look at 2 really awesome things trending this Friday 13th. 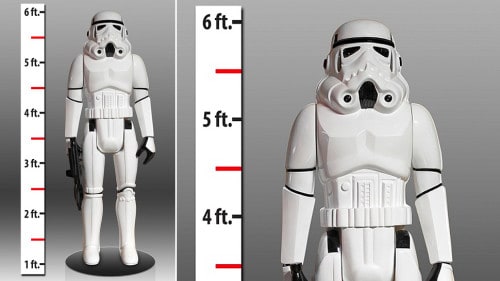 Yes, we know you’re not all Warsies out there but to be frank, we really don’t care because a six foot tall action figure of anything is incredible…okay, perhaps not Aquaman. What can you expect to pay for this incredible piece of geekery? When it’s released you’re looking at about $2,300. There is something to be said for a build your own life sized Storm Trooper though, what better to guard the entrance to your …err mansion door.

Bioware Shares More Details on the Next Mass Effect!

If you’re a fan of the Mass Effect gaming series then check out this Gamespot article where Bioware shares more deets on the next Mass Effect! The newest game in the series has no release date as of yet but the game will run on the Frostbite 3 engine and according to Bioware features some incredible graphics. According to the games executive producer, Casey Hudson and his recent Twitter tweet: “In a milestone review for next Mass Effect game. Team is doing outstanding work. Looks beautiful, fun, ambitious, and Mass Effect-y!”