Your Brother’s Ink Is Mine! You Will Be Next 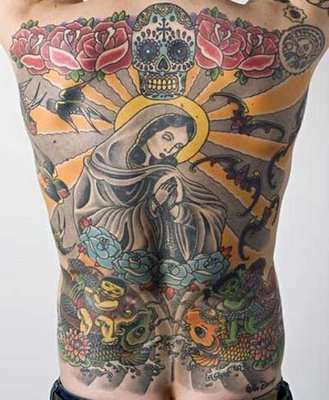 Would you buy someone’s tattoo off of them? No, I don’t mean pay for them to get the tattoo inked into their skin (or teeth), I mean pay for ownership of the ink that is already on their skin. This is probably the first case of selling of a tattoo while still on the owner’s body.  Tim Steiner sold the tattoo on his back to Zurich gallery owner Jutta Nexdorf for about $218,000.

Ha, sucker! Doesn’t he know he could have gotten that tattoo himself for $214,500 dollars cheaper? Belgian artist Wim Dalvoye took 35 hours to create this elaborate tattoo of the Virgin Mary. The artsy fartsy Jutta Nexdorf plans on exhibiting Steiner’s back three times a year and when Steiner passes away, Nexdorf will most likely skin him and display the tattoo in his gallery. What an asshole.