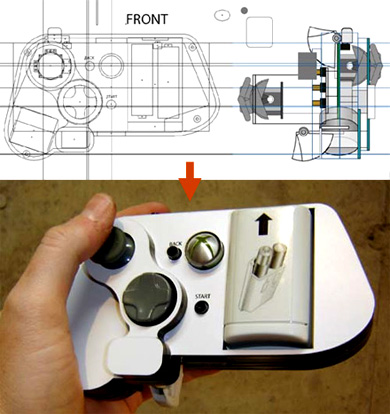 Ben Heck (he of console laptop fame) has designed and built a one-handed Xbox 360 controller for an injured Iraq war veteran. Most of the controls are on the underside, including the A, B, X, and Y buttons, the right analog stick, and both triggers (the left trigger is operated via the index finger, the right via the pinky).   Only the d-pad, the left analog stick, and the start and back buttons were left on the front of the controller.   As the vet who requested this had his right hand injured, this custom controller is made for the left hand.   Now if only someone ambidextrous would copy this and add a right-handed version, they could play against themselves!   Available only via special request from Ben Heck (or DIY). — Mike Payne