Wonders of the future: collect the whole set!

Over at the priceless blog Paleo-future, Matt Novak explores a collection of futurist cigarette trading cards from the 1930s now in the collection of the New York Public Library. I’m familiar with such cards, which came with packets of smokes in the early twentieth century, as the precursors to bubble-gum baseball cards, but I didn’t know that they covered cultural and technological topics as well. This Age of Wonder and Power, a series produced by Max Cigarettes, ran to an astonishing 250 cards, including visions of atomic-powered ocean liners and rooftop aerodromes—and the image above, in which London is lit by a great coil of quartz tubing half a mile in diameter stuck atop what I think is the Westminster Bridge. Shining 100,000,000 candlepower into “every corner of the city,” the apparatus would “enable night to be completely thrust back and darkness abolished.” Right—and we’ll sleep when the bleary-eyed mobs riot and society collapses. Visit Paleo-future for a look at a few more nicotine-fueled dreams. 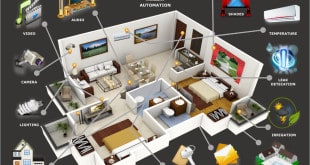