Windows 7 Surpasses Windows XP in the US 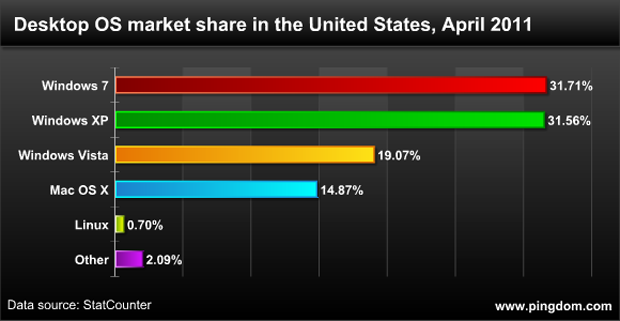 In the eyes of many people, myself included, Windows XP is just about perfect. Sure, it’s over a decade old and Windows 7 and Mac OS X are both superior to it in almost every respect, but people (again, myself included) love it. It requires relatively few computer resources and, on modern PCs, runs absurdly fast.

But Windows 7 is also pretty awesome, and that awesomeness has helped the newer operating system to propel past Windows XP in terms of total market share.

StatCounter and Pingdom have taken data from some three million websites and have broken down their operating system usage. Their results found that Windows 7 users edged out Windows XP users by a mere 0.15%.

I think that’s fascinating is that nearly 1-in-5 users are still using Windows Vista. Of course by “fascinating” I mean “repulsive,” but I digress. This information means that the United States has joined contries like Canada, England, Australia and Germany as countries that now prefer Windows 7 over Windows XP.